When the Singer 20 toy sewing machine was introduced in 1910 it was in a league of its own. Although the Singer 20 was of a simple chain stitch design requiring just 40 components, it was very well engineered with a cast iron body. Compared to other toy sewing machines of its era, and indeed since then until the present, it is far more like a miniature adult machine than a child’s toy. When other manufacturers wanted to enter the same market, many decided to do so with a close copy of the Singer 20.

After the end of WW2 several U.K. companies such as Essex, Grain and Vulcan decided to produce toy sewing machines. The first machines from all of these makers very closely resemble the Singer 20. The Japanese made Lead (All Lead) machines were produced from 1931 until 1941. These seem to have been even closer replicas of the Singer 20.

For collectors there are 4 main versions of the Singer 20 machines. The original Singer 20-1’s were first sold in 1910 with 4 spoke handwheels. In 1914 the second version had an 7 spoked handwheel and had tension discs added. Then in 1926 numbers were stamped onto the machine to indicate the threading path.

In the 1950’s the 4th major change (model 20-10) saw a completely different look to the machine with an aluminium body with rectangular base, a full width stitch plate and an enclosed mechanism. This was also known as the Singer 20 Sewhandy which came in standard black, tan or cream and very rarely in red or blue. Later variations of the Model 20 Sewhandy included an electric motor drive built into the base.

In the 1970’s Singer resurrected the model 20, manufacturing it at their factory in Turkey. These were identical to the 1926 models and were known as the K20. These can be distinguished from the original model 20’s made in the 1920’s and 30’s by a ‘Made in Turkey’ decal under the main Singer USA decal on the rear of the machine body. The Turkish K20's were sold in a small bentwood case which has a metal Red 'S' style badge rivetted to one side.

Most Singer 20 toy sewing machines use a short 24x1 needle which has flat shank fitted to the right, so that the needle is threaded from left to right. However, some of the later Sewhandy models (40K & 50D made in UK) use type 24x3 needles. These are obsolete and almost impossible to find if replacements are ever required. 24x3 needles are physically the same size as the 24x1, except that the flat on the shank is on the same side as the groove up the side of the needle.

The small Singer 24 chain stitch sewing machines were just 10" wide with a 5" gap between the needle and arm. They were mostly made at the Elizabethport, New Jersey factory in the USA from 1888 through to the 1940’s. These model 24 machines encompassed many variations over their production lifespan. Although mainly targetted at the industrial sector, where they were popular with milliners and rosette makers etc., they were also at times marketed as small domestic machines and as children’s toys.

A few model 24K machines were made at Kilbowie in Scotland.

Most Singer 24 machines use the short 24x1 needle which has flat shank fitted to the right, but some variants also use the 24x2 and 24x3 variations. The K1 and K3 variants use the rare 24x3 needles. 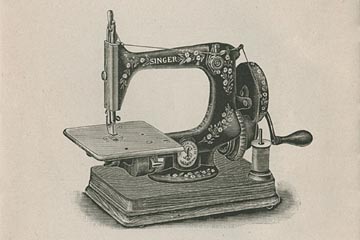 The Singer 30K was another small chain stitch machine from the early 20th century, but it was clearly never meant to be a toy, although its exact intended target market is not clear. Only 15,500 of these very rare Singer miniature sewing machines were made during 1912/13 at the Kilbowie plant in Scotland before production was stopped. 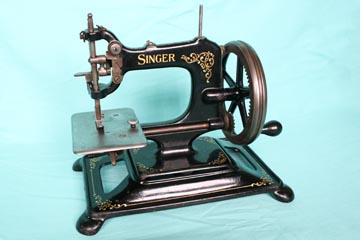 In the early 1960’s Singer introduced the Sewhandy 40K and the almost identical 50D to replace the earlier Sewhandy 20 toy machines. These were made to look more like an adult sewing machine with a deep pyramid style base, a solid handwheel which merged into the body, enclosed drive mechanisms and front mounted tension discs. Electric models of these machines were embedded into a larger base unit which housed the motor and controls and supported a clip on hard plastic cover. 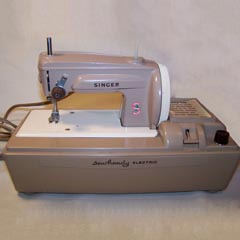