By the mid 1960's with sales of sewing machines dropping, Singer decided to re-start manufacturing the 221K again at the Kilbowie factory. The result was the new white Featherweight model 221K-7. which incorporated several cost saving design changes. 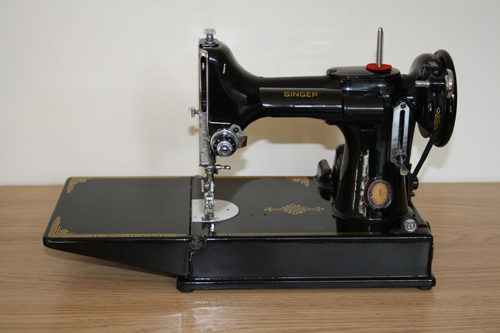 During the Second Word War a few 221’s were produced with a black crinkle finish. Uniquely these had narrow grooves machined around the edge of the bed. Some of these also had a special faceplate with matching grooves. With chrome in short supply ‘Blackside‘ models also appeared for a short time after WW2. These were fitted with chemically blacked faceplates instead of the normal chrome ones.

The white K7 variants ranged in colour from creamy white to ivory to ‘celery‘ or pale green-white. 221J tan models range from creamy beige to light brown. These are the only original colours produced, however in the US it is popular to respray them completely different colours with car paint!

The black 221 and 221K‘s had black carry cases, similar to LP record cases, covered in thin black fabric. The patterning on the fabric changed in design over the years of production, so did the box interiors. Early 221/221K Featherweights had a tray in the top which rested across the top of the machine and housed the attachments, with a metal framework into which the spare bobbins were clipped. The power cable and foot controller was also supposed to be stored on this tray. However trying to squash the stiff cabling and foot controller into this narrow area proved difficult and so they were left loose inside the box. This often caused damage to the machines themselves and was especially obvious with the white 221K-7 model. This was also not helped by the fact that the power and foot controller on this model was wired in, not removable as with the black versions. Later model 221 and 221K boxes had the foot controller clipped into a metal frame in the lid of the box and a much smaller accessory tray instead of the full width one. This was clipped onto the left hand side of the case. A clip at the back left hand corner of the box was used to hold the tin of ‘Singer‘ lubricating oil. The carry case for the white 221K-7 came in different colour combinations of two tone light blue base and dark turquoise blue lid to pale blue and white versions, making them look very smart, but the writing was on the wall and production finally ceased in the late 1960‘s.

In the UK over 300,000 production numbers were assigned to the 221K models. In the US the total number of 221 models was in excess of 1.75 million making the little black machine far more than a child‘s toy!

Please see the dedicated 221K7 page for more information about the white 221K-7's.

In 1951 the Singer celebrated its centennial by producing a special badge for their Featherweight 221‘s and 221K‘s. It was the standard Singer emblem of the time but with the inscription ‘A Century of Sewing Service 1851-1951‘ inscribed in a blue band around the outside of the oval. These limited edition badged models were made for only one year with a total production run of just over 40,000 being made at the British Kilbowie factory.

After 1951 the standard badge incorporated a black banding around the outside edge.

In the USA in 1936, a very rare red Texas Centennial Badge was attached to a few Featherweight 221‘s and marketed as the ‘Texas Centennial Exposition 1836 ­ 1936‘ in Dallas, Texas.

Until mid 1953 the model number did not appear on the machine, but after this a separate model number plate was riveted onto the body just below the Singer badge.

The later 221K-7 white models used a printed badge which was glued into place. 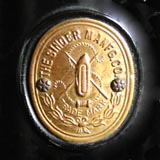 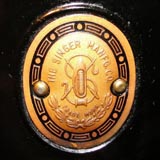 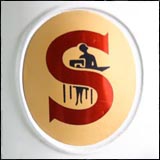 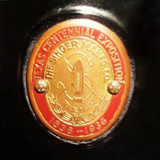 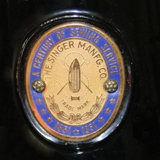 During its production period there were 5 versions of the 221 Featherweight. A good way to quickly identify a particular variant is by looking at the motor nameplate, as they each used motors of different types.

The 221K4 is also the only variant that had the switch for the light built into the lamp body instead of on the machine base. It also was the only one to use an RF suppression capacitor mounted underneath the baseplate. If this is present then a small green wire with a brass plug should be visible fitted into the lower clamping bolt of the motor case.

The K7 variants had several major changes from earlier models. They were painted white without any decorative decals, the hinged extension table was shorter, they used a clamshell style foot controller that was permanently wired into the machine, and the original cam and rocker assembly for transferring motion the bobbin and feed-dogs was replaced with a toothed belt system.

Differences between US made 221’s and UK made 221K’s were minimial. Early US 221’s used a chrome rimmed balance wheel, whilst UK made 221K’s and 222K’s used plain black painted wheels. 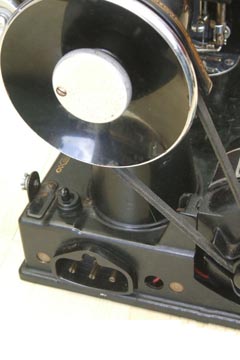 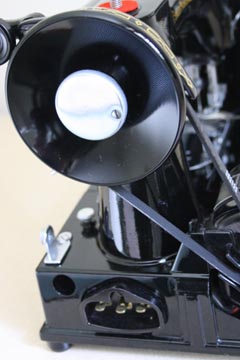 US models used round pin electrical connections whilst UK models us a similar plug and socket but with flat pins.