The Pinnock company was originally established in 1891 in Sydney, New South Wales, Australia. From 1904 the company sold imported sewing machines into the Australian market from makers such as New Home. Gradually more and more of the machines were made in Australia until by the late 1940’s the complete machines were being manufactured in Australia, including the motors.

In 1957 the company relocated to a new purpose built factory in the new city of Elizabeth which was being established about 17 miles north of Adelaide, South Australia. The factory was officlally opened by Thomas Playford on 1st November 1957. Within a few years the company was employing 50 workers. Motors for the machines were made by Wernard.

During 1961/62 the company established a small assembly plant near Wellington, New Zealand.

Pinnock had its own distribution facilities in the major Australian cities and also in United Kingdom, Ireland, Belgium and New Zealand.

In the U.K. Pinnock sales were managed through Pinnock Electrical Appliances (G.B.) Ltd. which had offices at 224 Clapham Road, Stockwell, London SW9, but later moved to 17 Hanover Square, London W1

The Pinnock manufacturing centre in Elizabeth was closed in 1967.

ZigZag machine (green) with fold down spool pin. Feed dogs can be set to normal, reduced height for silk, or lowered completely for embroidery. Uses standard 15x1 needles and a class 15 style bobbin case and bobbins. 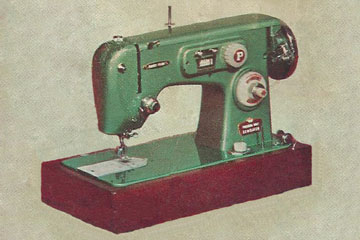