Much has been written elsewhere about the financial shenanigans of the Moldacot Company in its short lived history. Some of this is factual, but much of it appears to be embellishments under authors license in order to make a more engaging story. Instead we will limit ourselves to the known facts about these interesting little machines themselves.

The Moldacot Company was formed for the express purpose of marketing a small pocket sewing machine utilising the patent of S.A. Rosenthal. The company was formed in December 1885 by Albert Moll and John Cottam with offices in Bloomfield House and 58 Coleman Street, London. The machine was introduced for sale in July of the following year in Great Britain with agencies in colonial countries such as Australia and New Zealand. The company did not manufacture the machines themselves, but sub-contracted this to William Brown, 45 Brearley Street, Birmimgham and James Holroyd, Tomlinson Street, Manchester and another company in Germany. 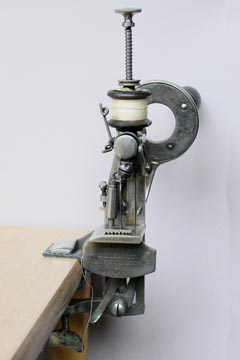 When it was introduced the Moldacot was the smallest sewing machine available fitting into a case/tin measuring only 8" x 2-3/4" x 1-1/2". The manufacture of the cases and tins was sub-contracted to the Bryant and May Co. Although small, the machines themselves were sturdy and well made from nickel plated brass with a built in clamp for attaching them to a convenient surface. They were popular with tailors and seamstresses for making tacking adjustments during fittings.

Initially the machine was operated by pushing down the needlebar against the spring return. However shortly after its introduction a small handwheel was added. This was either a solid wheel or a circular design with an open centre. Unfortunately it was never possible to fit machines with their handwheels attached into their tins.

The Moldacot’s used a round shank No. 1 needle made by Milward’s of Birmingham. Originally the tiny bobbin and its case had to be pushed out with a needle or pin, but machines made after approx. serial number 11,000 had a hinged locking bar added which made it easier to remove the bobbin case. However the whole arrangement is still very fiddly due to their very small size.

Bobbins were wound by mounting them onto a small winding shaft which fitted into a hole in the side of the body. There was also a second hole higher up the body. This could be aligned with a hole in the needlebar slide so that the bobbin winder could be inserted in it to fix the machine in the correct position for setting the needle point level with the machine bed. The German made Moldacot machines did not have this feature. 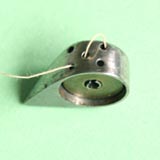 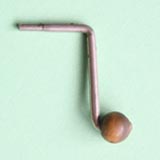 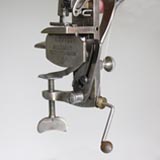 The Moldacot machine reached the market to rave reviews, and the company received massive investment. The founders Moll and Cottam very soon sold their interests in the company to pursue other projects. Shortly after it became apparent that there were significant flaws in the design and it was failing to sell in the expected numbers. The company name was changed to the Moldacot (Colonial & Foreign) Pocket Sewing Machine Co. and then in March 1888 to the United Sewing Machine Co. before going into liquidation soon after.