The White Sewing Machine Company was originally started in 1858 as the White Manufacturing Company. It was founded by Thomas Howard White and a partner in Templeton, Massachusetts, when as a 22 year old, he invented a chain stitch sewing machine small enough to fit in the palm of the hand. The White ‘New England Sewing Machine.’ was sold for $10. This machine was so successful that within a few years it was necessary to obtain bigger premises. In 1866 The decision was made to relocate to Cleveland, Ohio as this was felt to be more central to their markets.

When it was incorporated in 1876, the company changed its name to the White Sewing Machine Company. Like many other American manufacturers the company soon opened offices in London to manage its export sales to Europe. By 1880 its European Office had moved to 19 Queen Victoria Street, London, where it stayed for around 10 years before moving again to 48 Holborn Viaduct. The start of a new century saw the British operation down sizing to an agency, run by Bishop’s Cluster Company Ltd of 14 Golden Lane, London.

Between 1881 and 1891 the company won many prestigious awards for their excellent sewing machine designs and were ranked second only to those manufactured by the Singer Sewing Machine Company.

During the 1960’s the White Sewing Machine Co. like many other American companies could not compete with the low cost Japanese machines that were flooding the market. All American manufacturers with the exception of Singer had either gone bankrupt or were taken over by foreign companies. In 1986 White was merged with the Swedish company Husqvarna Viking as part of the Electrolux group.

A unique characterictic of all White VS machines is that the shuttles have a central pin which fits through the hollow tubular shaft of the bobbins. When buying any White VS machine it is essential to ensure it has both its shuttle and bobbin, as it would be virtually impossible to find replacements.

The White ‘Peerless’ sewing machine was the most popular early model produced by the White Sewing Machine Company with many variations being produced over several years. The machines usually have the various patents applied for stamped on to the slide plates, which helps with the dating of these models. Early examples have beautiful central decals which look like landscape paintings and elaborate gold decals on the rest of the machine body. One of the ‘Peerless’ models has a very cleverly designed hand crank which folds back behind the machine so that the machine can be stored in its case.

The ‘New Peerless’ came into production at the end of the 1800’s and bears a striking resemblance to the Singer 28K, even down to the early bentwood case with ‘shoulders’.

The White ‘Gem’ is a very rare and unusual machine that no one seems to know very much about. So far we have found no references to the Gem in company documentation or adverts. The Gem is a small model with beautifully colourful decals and mounted on a heavy cast iron base, making it a very sturdy little machine to use.

The hand wheel was the same as had been used on the very early Peerless models, with a pulley on its outer face to allow the option of the machine being operated by a treadle. The hand wheel incorporated a spring pin which allowed it to be disconnected from the main drive gear when rewinding a bobbin. The shuttle cover plate just bears the name White S.M. Co. Cleveland, Ohio, U.S.A. but there are no patent dates. The Gem uses the same shuttle (type No. 282) and bobbin as the White’s ‘Peerless’, but other than that it is quite unlike other models in the White range. Some sources believe the Gem to have been made between 1886 and 1892. Although this seems likely to be true, the accuracy of these dates appears to be unproven by documentary evidence. 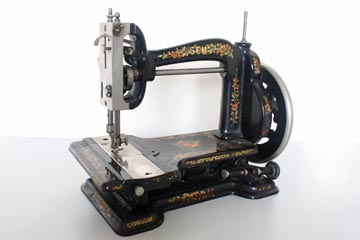 Early ‘Gem’ machines had a serial number stamped into the casting under the front slide plate. So far, those examples with serial numbers have been in the range 10000 to 11500. This is itself a bit of an enigma, because they clearly do not fit in with the sequential serial numbers White used for all their other models. Later ‘Gem’ machines had a revised bed with deeper sides and did not carry serial numbers. It is not known how many of these beautiful machines were made, but very few seem to have survived and so they are now highly sought after by serious collectors.

In 1893 the ‘Gem’ appears to have been replaced by the equally enigmatic and rare White ‘Prize’ model. The Prize utilised the same basic mechanism as the Gem and the same hand wheel etc., but it had a new bed design with fancy sides and a high mounted bobbin winder. It also used the No. 349 revised VS111 style of shuttle. The Prize models do not appear to have had serial numbers. 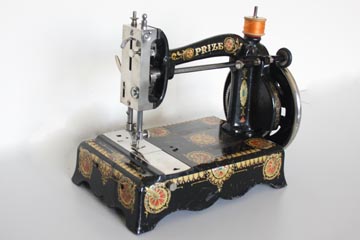 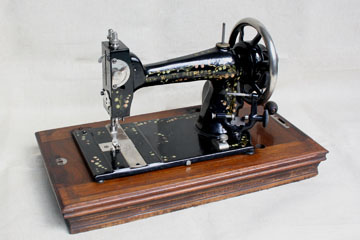 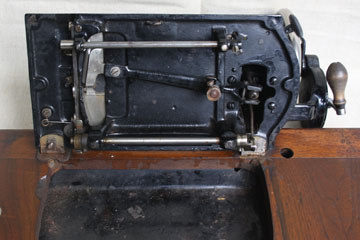