The Willcox and Gibbs Sewing Machine Co. (New York) was formed in 1857 by James Willcox and his son Charles, of Philadelphia and James E.A. Gibbs of Pocahontas County, West Virginia. Gibbs patented his first practical single thread rotary twisted chain stitch machine for domestic use in 1856. Willcox was a forward thinking businessman and was in charge of production. He hired the services of the Providence, Rhode Island company of Joseph R. Brown and Lucian Sharpe, who undertook the manufacturing of the machines.

Work began early in 1858 with the local New England Butt Company casting the frames. J.R. Brown and Sharpe were beset with problems and it was 8 months before the first 50 Willcox and Gibbs machines, of the original 100 commissioned orders were finished. Luckily the machine was in instant success and soon the orders were rolling in. 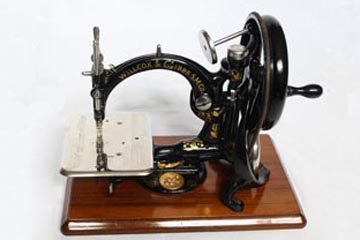 A few years after starting the company Willcox & Gibbs opened its London Offices at 135 Regent Street. Prices for the machines ranged from £8 to £15. All the machine heads were built and shipped over from the United States, but some handwheels and wheel mountings were cast at the Coalbrookdale Company in Shropshire. The Coalbrookdale works near Telford, was in Victorian times, famous for producing high quality ornate iron castings and the wheel mountings made here carry a registration mark for 1869. A special Willcox and Gibbs hand crank mechanism was produced for the European market, but the overall shape of the machine remained the same for the whole of its production life.

Early models used a thread tensioner with glass discs, and some of these have the Willcox and Gibbs badge on the back of the casting and a deeper wooden base than later models. 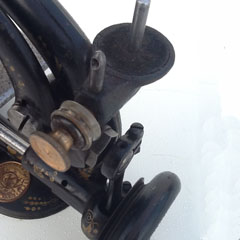 In 1875 the glass tension discs were replaced by an automatic tension device which ensured that the tension did not get out of alignment and which adapted itself to different thicknesses of fabric. These were marketed as the ‘Silent Automatic’ sewing machine. Listed on the cloth plate of all Willcox and Gibbs machines are the patent dates along with a very clever mechanism to show the number of stitches to the inch.

Around 1871 the company’s chief European offices were opened at 150 Cheapside, London. After 1885 the offices were moved to 94 & 96 Wigmore Street and then a few years later to 37 & 39 Moorgate Street. After 1907 the head offices were based at 20 Fore Street London, E.C. and the Willcox and Gibbs Sewing Machine Co.Ltd was founded with branch offices at Nottingham, Manchester, Leeds, Leicester, Luton, Glasgow, Belfast, Paris, Milan, Brussels and an agency at Dresden! They advertised ‘repairing departments’ at all offices and a ‘certified agent’ in most towns.

Machines for the domestic market were sold as either hand or treadle versions but with the arrival of electricity, the machines could have an electric motor attached to the right hand side of the machine in place of the hand wheel. 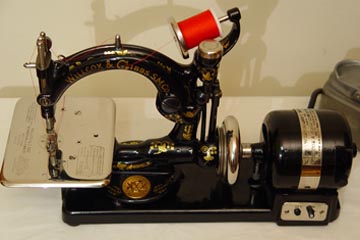 In addition to the domestic market, the company also produced a wide range of industrial models. Between 1878 and 1884 industrial machines were introduced under the names ‘Straw’, ‘Bag’ and ‘Handstitch’ machines and in 1889 a 2 thread ‘overlock’ machine which was able to produce 3000 stitches a minute. In 1889 the first Willcox and Gibbs lockstitch machines appeared on the market. In 1912 a ‘Flatlock’ machine designed for seaming knitted underwear was invented, followed by a ‘Feldlock’ machine designed for seaming tubular garments.

Brown and Sharpe continued to produce the Willcox and Gibbs chain stitch machine in its original shape until 1948. Towards the end of the production the serial numbers changed from the ‘A’ prefix number to ‘B’ prefix numbers and the machines had scalloped bases.

The Willcox & Gibb company finally closed down in 1973.