The Williams Manufacturing Company was originally founded as C.W. Williams & Co. in Boston during 1856. It was established by Charles W. Williams, his brother Caleb Nelson Williams and Mr. Orvis for the manufacture of sewing machines. The business was on a limited scale making a machine similar to the Grover and Baker, which they named the ‘Little Williams’.

In 1864 the business was relocated to Montreal, Quebec to avoid the restrictions of US Patents, which at that time were not enforceable in Canada. In 1866 the company started manufacturing copies of a Howe machine, and then in 1868 a Singer Family. The Singer machine sold rapidly with accumulated sales of 6000 in the first 2 years of production.

In 1872 the original C.W. Williams Co. was merged into a joint-stock company with a capital of $500,000 known as ‘The C.W. Williams Manufacturing Company’. Just 3 months later, C.W. Williams died and the company then came under the ownership of Sir Hugh Allen. The capital was increased to $1,000,000 and the name changed to ‘Williams Manufacturing Co.’. Sir Hugh’s brother Andrew Allan was Vice-President and Douglas Graham was Managing Director. To meet the growing demand for high arm machines, the ‘Williams’ model was introduced in 1878. They were well received and the demand, particularly in the US, grew quickly. 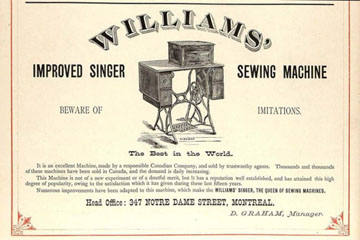 The first Williams factory In Montreal was located at 68 Prince Street. In 1879 production was moved to a new much larger factory adjacent to the railway line at 1789 St. James (Rue Saint-Jacques) in the south-western suburb of St. Henry (Saint Henri). 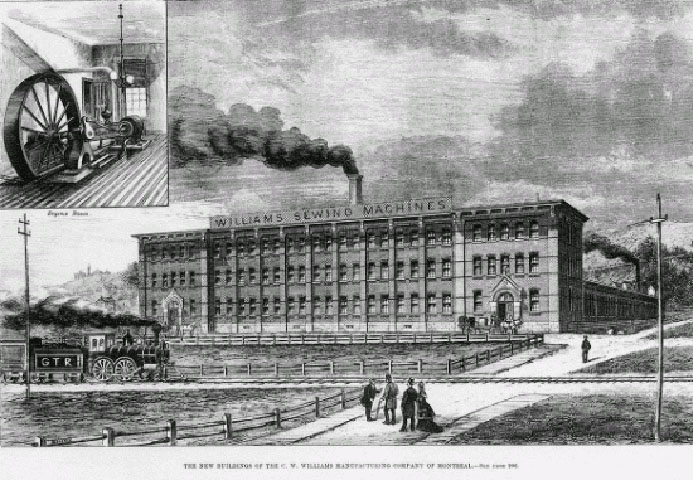 Besides the ‘Williams’ Singer’, the company also produced the Williams Improved Medium, the New Williams and the Helpmate.

After several years of decline, the Montreal factory was closed in 1922.

In 1879 a small factory was started in Rouses Point, New York, a small village of less than 2000 people situated on the Canadian border. It had been intended that the factory would produce about 50 machines a week to supply one agency in Chicago, but the demand continued to increase and soon exceeded the capacity of the small factory.

Several places offered inducements for the company to move to their location, but in October 1881 it was agreed they would move to Plattsburgh. The local citizens offered to build a single story brick building 300 feet long a 40 feet wide, with lines of water powered shafting along the length. This would be provided to the company rent free and exempt from taxes for 20 years, provided they gave full time employment to at least 100 men. A committee of E.S. Winslow, Douglas Graham and Andrew Williams was set up to locate the buildings.

A subscription of $14,000 was raised to pay for the buildings, but it soon became apparent the original plan was considerably more complicated to plan than expected. It was agreed that instead, the amount was paid directly to the Williams Manufacturing Company and they would lay the building out at their discretion.

Work started on the foundations on 9 November 1881 at a site on a bend in the Saranac River known as the Battery, on the outskirts of Plattsburgh. When the building was finished a year later, it comprised of a 3 story machine shop 208 feet x 40 feet, a wheel house, a 2 story cabinet shop and a single story foundry. 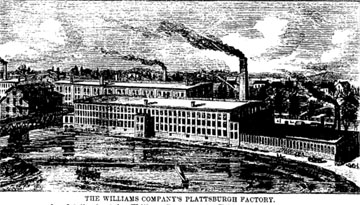 The first machines were made in November 1882 with Hugh MacDonald as the factory superintendent and employing about 250 men. Models made were the ‘New York’, ‘Williams’ and the newly introduced ‘Helpmate’.

The factory manufactured sewing machines for both the Williams Manufacturing Company and for the New York Sewing Machine & Manufacturing Company. These were under the superintendence of Hugh McDonald and J.B. McCane respectively. Although they operated as separate companies, they had common interests and were both under the general management of Douglas Graham of Montreal. 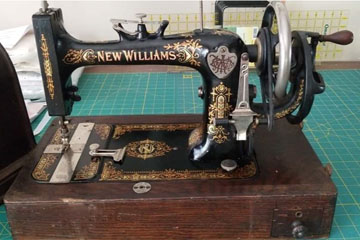 In April 1885 Hugh McDonald transferred to Montreal. In 1889 he was hired as General Manager of the new Demorest Sewing Machine factory being established in Williamsport, PA.

Later the production of ‘Wellington’ typewriters was also introduced at the Plattsburg factory. Sewing machine production was stopped sometime between 1902 and 1908. The production of typewriters continued until 1921, when the factory finally closed with the assets being sold by the receivers in 1922.