The Jones Sewing Machine Co. Ltd. started life in the town of Audenshaw, just east of Manchester and now next to the M60. In 1859, William and his brother John of Shepley Street, Audenshaw set up a business producing domestic sewing machines. At the time William owned an engineering firm producing very small steam engines.

Not long after they started they formed a partnership with Thomas Chadwick, trading as Chadwick and Jones. This didn’t last long, as in 1864 Thomas Chadwick went to work for Bradbury and Co., a rival sewing machine manufacturer.

Just 10 years later, in 1869, William Jones opened purportedly the largest factory in England at Guide Bridge, a few miles east of Audenshaw and the firm was registered as a limited company in 1879. The Jones factory produced a wide variety of machines for both domestic and industrial use, most noticably heavy industrial machines for Burton’s the tailors.

Most of the machines produced had equivalent Singer models but with various differences. The ‘Jones Family’ and ‘Jones Medium Transverse Shuttle’ were very similar models to the Singer 12 and 13.

A Jones hand crank model called the ‘Cat-Back’ (now more commonly called the ‘Serpentine’) was made in large numbers and remained in production for almost 20 years. 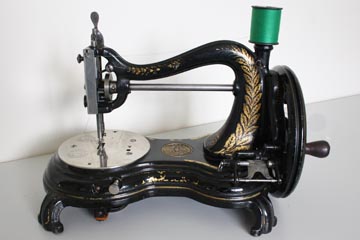 The early Serpentine models did not have a take up lever and the tension discs were mounted on the arm of the machine instead of the faceplate. By around 1883 the faceplate was brass plated with the tension discs mount on it and the decals over the top arm of the machine were ornate vine leaves. By the end of the 1880’s the faceplate was nickel plated and in the centre of the machine bed a decal proclaimed ‘Jones Hand Machine’. A couple of years later this decal was replaced with a brass boss showing a gryphon and the words ‘Jones Hand Machine’. Stamped into the round cloth plate are two stamps The first with the words ‘As supplied to H.R.H. Princess of Wales’ and ‘Jones Hand Machine’ and the second with ‘Jones Sewing Machine Compy Ltd’ and ‘Jones & Compy Guide Bridge, Nr Manchester’ with a trade mark bird with outstretched wings. The Jones Serpentine was also badged for sale under the names of different retailers and special limited edition versions were produced until 1907. 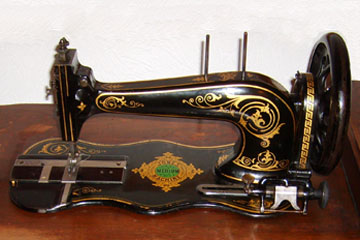 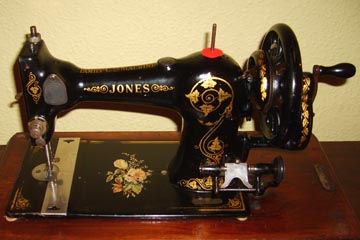 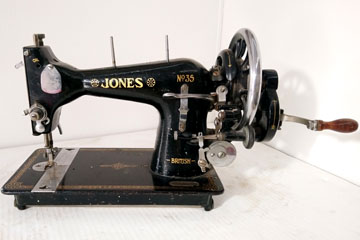 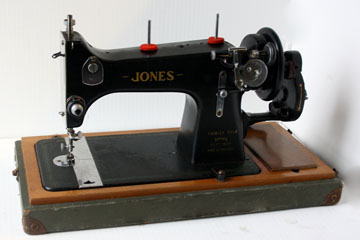 The Jones Medium Spool was a rotary hook machine that was patented in 1889 and was a copy of the Wheeler and Wilson No.9, the production of which was later taken over by Singer. A few years later the Jones Cylindrical Shuttle was introduced. The Jones Company badged this model with different retailers names. A point of interest ­ a badged Jones machine has a large screw head on the top of the arm between the spool pins. 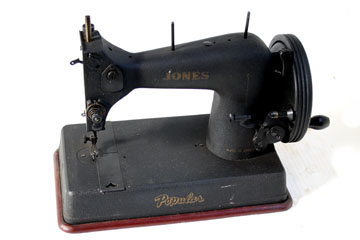 Both the Jones Medium Spool and Cylindrical Shuttle machines remained in production until the 1930’s. These models were often badged with different names for larger retailers. 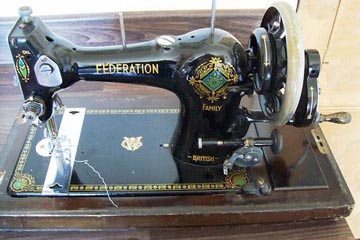 Badged Federation For The Co-Op 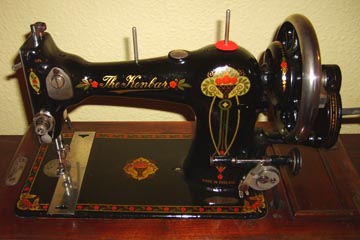 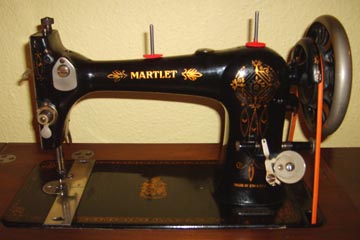 In 1957 the Jones Company was sold to the Imperial And Continental Gas Association. ICGA already owned E. Harris Ltd. which made sewing machines under the Vickers and BSM names. It appears that E. Harris may well have become involved with the distribution of the Jones machines at this time. By 1962 ICGA had sold its sewing machine business at a minimum book value to the Brother International Group of Japan. They are still today producing sewing machines at the old Jones factory under the Brother name.