The production of sewing machines by Gustav Winselmann started in 1892 in the town of Altenberg and continued until there until the Second World War.

The roots of the business can be traced back to the Clemens Muller Co. where Leopold Oskar Dietrich, Hermann K�hler and Gustav Winselmann all worked. They left Clemens Muller in 1871 to found their own workshop for the manufacture of sewing machines in the Meushchee brush factory under the name Dietrich & Co.

Their first model was produced a few months later under the name ‘Allemannia’ and by the end of the first year, approx. 300 had been made.

After some disagreements between the partners, Dietrich resigned in 1873 and the company was renamed 'Kohler and Winselmann'. In 1877 the factory was moved to a new location is Kotteritzerstrasse (now Kathe-Kollwitz-Strasse), Altenberg.

In 1891, Gustav Winselmann also left to start his own factory, known as ‘Gustav Winselmann Gmbh.‘ The factory was located in Zwickauer Strasse, Altenberg in what had previously been a hat factory. It is said that by 1913 Winselmann had produced one million sewing machines of various types. The factory underwent several major expansions, until by 1927 230+ workers were employed. After the Second World War, the company did not restart manufacture.

Many of the Winselmann models were known by the name ‘Titan’. 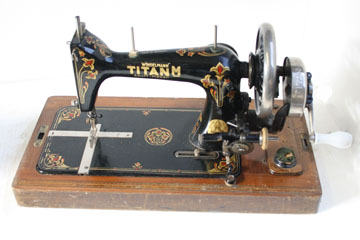 Kohler continued the manufacturing of sewing machines as Hermann Kohler AG employing around 800 workers by 1927.

After leaving the original partnership, LO Dietrich went on to found the Vesta Sewing Machine Works in 1875. By 1927 this sucessful business employed over 1250 workers. At the end of the Second World War Altenberg was in East Germany and the company was nationalized. After 1947 when production was slowly restarted, it was known as VEB Nahmaschinenwerke Altenburg.