The Vulcan miniature and toy sewing machines were made by the the Sydney S Bird company under the trade name 'Cyldon'. The company originated in Enfield, Middlesex, but around 1953 it relocated to a new factory in Fleets Lane, Poole, Dorset.

The first Vulcan sewing machine was not an exact clone of the classic Singer 20, but it was certainly heavily inspired by it, and the operating mechanism is almost identical. It first appeared in about 1948 with distinctive bright blue paintwork. The first examples Mk1a models had a spoked handwheel and rectangular cloth plate, but these were quickly replaced with a MK1b version with a solid handwheel and square cloth plate. 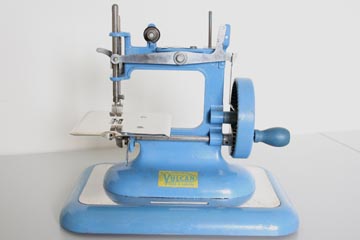 The Mk1 Vulcan used a 13x1 needle with a round shank which has to be carefully aligned when fitting. For the modern collector it is important to note that the yellow Vulcan name transfer on the body casting is very fragile and can easily be damaged by even the gentlest of cleaning. Examples with good intact transfers are much more highly valued by serious collectors.

Unlike its 2 main UK competitors (Essex and Grain), Bird's quickly developed their Vulcan machines with a series of new designs that were cheaper to make and which moved their machines more towards the lower end of the toy market rather than ones intended for serious sewing. The first of these new models was made in 1951/52. Although it retained the same basic mechanism as the Mk1, it looked completely different with a hinged extension table. The styling of this machine would appear to have been heavily influenced by the Singer Featherweight 221K. The Vulcan Featherweight came in either black or grey, with decal patterns very similar to the Singer Featherweight's placed around the bed and extension table. 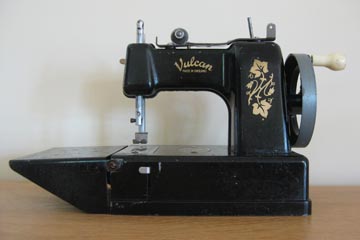 The next incarnation, often nicknamed the 'Dumpy' was a cosmetic variation of the 'Featherweight' model, without the extension table 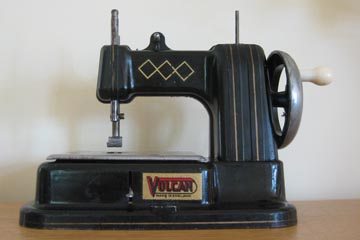 By the mid 1950's the Vulcan range comprised of 3 models. The red 'Minor, the Blue 'Junior' and the Red 'Senior'. These were quite lightweight designs and substantially less sturdy than the original Mk1 design. The main body was an alloy diecasting with the name cast into the front. The backside of the body was enclosed by a pressed steel panel which clipped in to give the appearance of a solid body. All 3 models came with a table clamp and had a plastic disc behind the tension unit which is prone to being broken. The Senior had a painted cloth plate which could be detached to turn it into a free-arm machine. 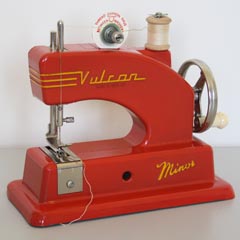 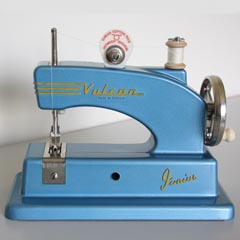 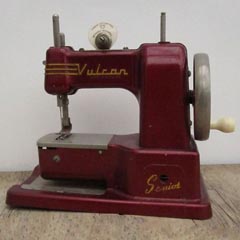 The Countess gave the impression of being a more upmarket model than previous ones. It uses a different mechanism to the earlier Vulcan models and is probably the best made and the smoothest running of all the Vulcan toy sewing machines. The Countess was a free-arm machine with a removable extension table, but production costs were cheapened by using a stick on label, which is now prone to coming off and being lost. The thread tension was produced by the reel mounting mechanism. 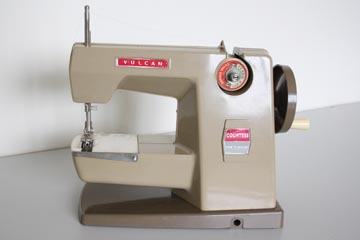 The Classic was essentially the same as the Countess but with a battery driven motor, making it Vulcan's first electric machine.

The final Vulcan machine was the Regal which was also battery powered. It appears to have been a final attempt to further cheapen production costs at a time when the company, whose main business by then was electronic and radio systems, was struggling to survive. 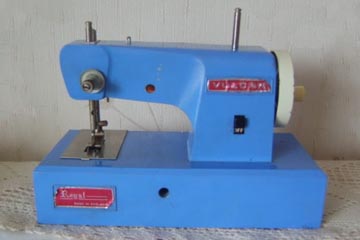