We get a lot of enquiries regarding 24x1 needles and 24x3 needles as required for Singer Sewhandy 40K and 50D toy sewing machines (TSM’s). Unfortunately some of the information posted onto online sewing forums by apparent ‘experts’ is either wrong or misleading, which just adds to the confusion.

We are therefore devoting a dedicated page to this subject in an attempt to clarify matters We are also advising how to get around the problem of not being able to find 24x3 needles, which have been obsolete for a long time and are no longer available anywhere.

In the late 1880’s Singer designed a range of small chain stitch sewing machines which required a ‘new’ shorter needle, to suit the small size of these machines and the chain stitch hook propeller. The first of these designs to be put into production was the model 24 and so the needle type became known as the 24x1.

When the small model 20 chain stitch machine finally went into production in 1910 it was promoted as a child’s toy. This also used the same style 24x1 needle until the 1950’s.

In 1912/13 the Clydebank factory in Scotland made a small limited run of 15,500 model 30K chain stitch machines also using the 24x1 needles.

Although the model 24’s were at times sold as domestic machines, or toys, their main market was for industrial use. Some of the industrial model 24 variants had 2 needles which were required to mount side by side. To accommodate the tightening of the second needle, it’s clamp screw had to be to the left. This meant using a special needle identical to the 24x1, except that the flat on the shank was on the left instead of the right side, to suit the clamp screw position. i.e the flat was on the SAME side as the long groove down the left side of the needle. These 24x3 needles were also used as standard on the 24K1 and 24K3 machines made at Clydebank.

Later when the newer style Singer Sewhandy 40 TSM was produced, its very small size and restricted access would have made it difficult to tighten a clamping screw on the right. Instead it was decided to use the 24x3 needle with a clamping screw on the left. Whilst this may have seemed a good idea at the time, it now creates a significant problem for owners of these machines. The 24x3 was always a special and scarce needle, but now it has been obsolete and out of production for a very long time, and so it is virtually impossible to find. However, there is fortunately an alternative solution. 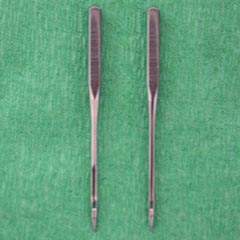 Because 24x1 and 24x3 needles are otherwise identical, apart from the flat on the shank, it is possible to fit a 24x1 instead. However if a 24x1 is fitted with it’s flat to the left to engage the clamp screw, then the groove down the needle is on the wrong side, as is the undercut on the other side of the eye, so the machine will not stitch properly. The answer is to fit a 24x1 needle, but with the flat apparently the wrong way around. i.e. with it’s flat to the right, away from the clamp screw.

Now the clamp screw will again move the needle to the right, but this time until the corners of the flat meet the wall of the hole. In theory this will be slightly more than the original 0.04 mm offset, but in practice that difference is infinitesimal, and far less than the manufacturing tolerances of the components anyway. For all practical purposes it can be regarded as being in the identical position to the 24x3.

Using a 24x1 needle in place of a 24x3 is essentially the same as fitting a round shanked needle and so the same setting procedure should be used. i.e. it is necessary to ensure that the long groove down the length of the needle is to the left of the needle before clamping it. A good way of doing this is to slide the tip of a small pin into the eye of the needle. By keeping the needle straight down the centre of the bed it maintains the needle alignment and it can be used to lift the needle into the needle bar without turning the needle. 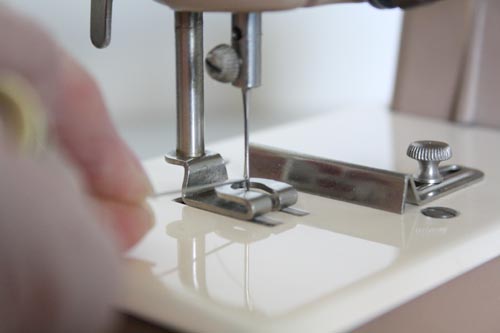 Although 24x1 needles are still regarded as current, they can still be very hard to find. We therefore try to keep a few of these for sale to people who cannot find them locally.