The Model 24 was Singer’s main product for the chain stitch sewing machine market. The 24 was a single thread rotary hook machine with a width of just 10" and a gap of 5" between the needle and the arm. Although the model 24 was primarily intended as an industrial machine, it was quite uniquely at times also marketed as a domestic machine, and even as a toy machine for children. 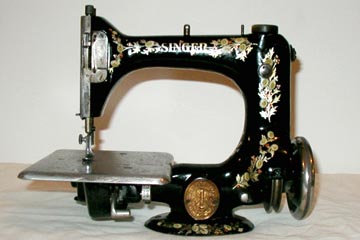 The Singer 24 was renowned for being compact, quiet and with light running qualities. These machines produced a decorative chain stitch, which when used with coarse thread, resembled braid. This made the machine popular for millinery, underwear, neck ties etc, and for applying decoration onto clothing and draperies.

Before Singer switched from using descriptive names to Class Numbers during 1891, the 24 was marketed as the 'Automatic Chain Stitcher'.

The model 24 machines were produced mainly at the Elizabethport, New Jersey factory between 1888 and the 1940’s, although a few were also made at the Kilbowie factory in Scotland. The machines were available with either automatic or plain tension adjustment. In it’s industrial guise, the Singer 24 was available in a number of sub-designs depending upon it’s intended application.

Instead of the regular bright plated cloth plates a few of the later Singer 24 models were provided with painted black plates which were adorned with the Red Berry decals. 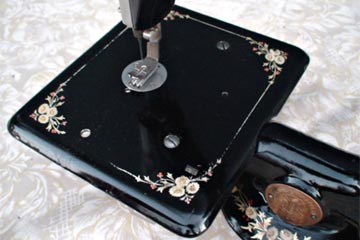 The Singer 24 machines use a short 24x1 needle (which was also used in early model 20 toys as well as 30K machines) with the flat on the shank fitted to the right, so that the needle is threaded from left to right. A few machines designated 24K1 and 24K3 used a 24x3 needle which was identical, except that the flat was on the opposite side of the needle.

We have a few 24x1 needles available individually. Please contact us for details.