In 1857 the first Singer showroom and headquarters were at 458 Broadway, New York, with 3 manufacturing small plants located around the city. With the original manufacturing plants unable to produce enough sewing machines to satisfy the expanding market, The Singer Company purchased a 32 acre plot of land at Elizabethport, on the outskirts of the town of Elizabeth in New Jersey. In 1872 the Singer Manufacturing Company opened a large purpose built a state-of-the-art manufacturing facility. At the time it was aid to have been the largest factory in the world devoted to the manufacture of a single product. 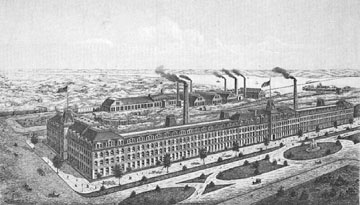 On May 7th 1890 the factory suffered a major fire. Fortunately much of the stock was left undamaged and the premises were soon rebuilt and production resumed.

During the Great War of 1914-1918 the Singer Manufacturing plant at Elizabethport produced 75mm cannons and .45 automatic pistols. Other Singer factories at Kilbowie in Scotland and Podolsk in Russia also produced munitions, armaments and artillery shells.

With the start of WW2 the Singer plants in the US and Scotland were again retooled for the war effort. This time they produced armaments ranging from pistols and anti-aircraft guns to castings for engine piston rings and wooden propeller blades. The major fire at Singer's wood store during the Clydebank Blitz, meant that the Singer cabinet plant at Thurso, Quebec, Canada, produced fine veneers for fitting onto airplane wings. In Germany the Singer plant at Wittenberge produced uniforms and armaments for the German military.

By the start of WW2 the Singer factory at Elizabethport was employing 5,000 workers and the now 113 acre factory had 48 buildings with a total of over 2.6 million sq. feet. The factory was an integarted self-sufficient plant, producing everything it needed to supply sewing machines. It also supplied sewing machine parts and the machinery to make the parts, to other Singer factories around the world. During this time, shipping throughout Europe was limited and Elizabethport stepped in to provide the family sewing machines and machine parts normally produced at Clydebank.

Activity at the Elizabethport facility dropped off sharply in the late 1970's and 80's when the plant stopped making all but industrial sewing machines.

The factory had less than 1000 employees when its shutdown was announced in February 1982. After the shutdown the original brick factory building built by Singer was converted to smaller industrial units.