Up until 1900 the Singer company had sold its machines into Russia through a series of local agents managed from an office in Hamburg in Germany. In 1900, after 4 years of preparation, the company purchased a block of land in the small town of Podolsk, Russia and quickly erected a factory for the manufacture of its sewing machines. This new plant was intended to supply the entire Russian market as well as those in Turkey, the Balkan states, Persia (Iran), Japan and China.

The plant was constructed and managed by Walter Frank Dixon, who remained in this position until 1917.

The plant was built rapidly and was equipped with the latest technology of the time. Singer’s Elizabethport factory supplied the plans for the buildings and all of the machinery except for the steam engines and boilers which were purchased in Russia.

In 1902 when the foundry and a 2 storey manufacturing building for lacquering the stands were completed, the Podolsk factory started production in the same way that other foreign Singer factories had started. That was, by manufacturing the heavy stands and fitting them with imported machine heads made in Elizabethport or Kilbowie. Once the stands were in production, work started on 3 new buildings to house the machinery for the manufacture of the machine heads. 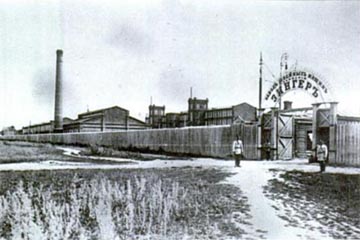 The first locally made machine head was completed in 1905. During that year a total of 5,430 machine heads were produced. In 1906 the plant was still only making one model, but 42,322 heads were made plus 155,745 stands in thirteen styles. In 1907 a second model of head was added and total production was almost 100,000 heads and 190,000 stands. In 1908 sales reached 440,000 machines, but despite all of the rapid expansion, the factory could still only produce 1/3 of the heads and 3/4 of the stands required. New plans were initiated to double the production of heads at the plant. By 1911 the plant employed more than 2500 workers making 300,000 heads and 200,000 stands. The Podolsk plant was now making the complete range of parts except for needles, flying shuttles and a few special parts. By 1914 they were making over 675,000 machines per year. Had it not been for the outbreak of WW1 it was expected that total production for 1914 would have exceeded 900,000, making it equal to that in the USA.

In 1904 a wood working department was added. The wooden cabinet parts were cut in the USA, and then for tax reasons shipped to Kilbowie for rough finishing before finally being sent to Podolsk for final finishing and assembly. This practice continued throughout the life of the plant, as suitable supplies of Russian veneer could not be found.

With the outbreak of the First World War, production of sewing machines dropped and the Podolsk factory was converted to making munitions. During the 1917 Russian Revolution the Singer company passed over control of the factory to the government for a nominal lease in order to prevent the plant from being closed. In November 1918 the plant was officially nationalised into state control and began the production of domestic "Singer" machines branded "Gosshveymashina" and then "Podolsk".

After WW1 and the 1917 revolution, production was slow to restart and by 1924 production was only just over 60,000 machines. In subsequent years production increased steadily, until in 1928 it was again back to over 400,000 machines per year, although now with 6500 workers. In 1931 for the first time the factory began producing industrial models and also sewing machine needles. Production in 1931 was around 520,000 machines with 11,000 workers.

After WW11 the Podolsk factory was re-equipped with machinery taken as reparations from the former Singer factory in Wittenberge. The older designs that Podolsk had been producing were updated at that time using details of the later Singer features taken from Wittenberge.

The factory was renamed Podolsk Engineering Plant (PMZ), and then later as Kalinin Sewing Machines (ZIK)

During the 1960's and 70's there was massive over-production of poor quality and outdated machines and the factory went into decline.

In 1994 with the changing political situation in Russia, the plant was purchased by Semi-Tech, which also owned the Singer brand, so the Podolsk factory was once again renamed as Singer. The factory was finally closed around 2000.

In 2011 the city of Podolsk celebrated the 230th anniversary of the town by erecting a full size bronze sculpture of a Singer sewing machine and treadle table mounted on a red granite pedestal in front of the local museum.