The Singer class 66 models were heavy duty domestic sewing machines that set the standard for several decades, and indeed the Class 66 bobbin and the 66 style horizontal oscillating hook arrangement are still in use on many ‘new’ sewing machines today. Because the 66K’s were full size machines weighing around 30lbs, they were usually sold in treadle tables or cabinets, although some hand cranked models, and later on some electric models, were also sold.

Surviving serial number records indicate British production of the 66K ran from 1907 until 1939. In the USA production continued until 1956. The later 66’s (sub-version numbers -8 to -24) had a lever type stitch length adjuster, instead of the usual thumb screw.

When the Class 66 appeared it was considered an engineering masterpiece, able to sew any thickness of fabric from fine silk to heavy canvas. The 66 first introduced the horizontally mounted rotary hook arrangement with drop in bobbins. A system which still survives in so many sewing machines from all makers today. This setup made loading the bobbin into the machine considerably easier than the earlier Singer 127 and 128K Vibrating Shuttle machines, or the 15K which had a fiddly bobbin holder which had to be clipped into position under the bed. 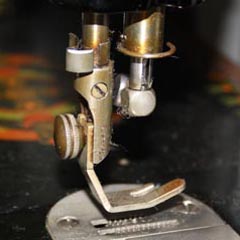 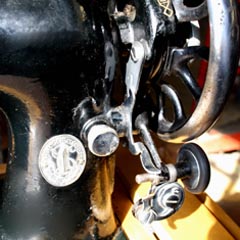 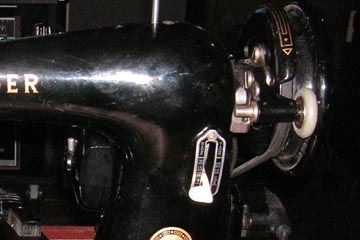 The stitch produced by the 66K was described as ‘near perfect’ and with the large harp clearance space it was a great favourite with tailors and seamstresses. 2 basic weakness of the Singer 66K design were that it did not have a reverse feed feature and it was unable to drop its feed dogs, which meant that a cover plate of some kind had to be used for embroidery or darning. 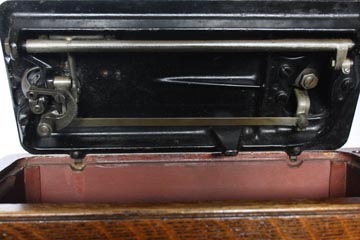 The first Singer 66K’s made at the Kilbowie plant in Scotland wore ‘Lotus’ flower decals. Later these were replaced with the ‘Sphinx’, which had been used on the 15K. Both of these patterns are popular with collectors. Later models of the 66K wear the rather plainer basic decal that was also used on the Singer 99K. In America the Singer 66 ‘Red Eye’ decal was a very colourful machine. 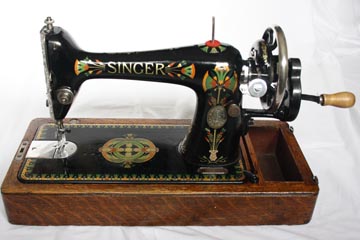 During the 1950’s many owners of old Singer 66K’s in treadle tables and cabinets chose to ‘modernise’ and down-size to smaller electric machines in plywood storage cases. When they part-exchanged their old 66K’s dealers would often remove the 66K’s from their treadles and refurbish them. The machines were usually stripped down, re-japanned and then when they were rebuilt, they would be fitted with non-Singer motor kits and put into non-Singer cases which were made for the purpose by third parties. When 66K machines were refinished in this way the original Singer badge had to be removed and the gold Singer logo and decals were lost. These machines were usually re-decaled with the ‘paperclip’ pattern from the 201K, which Singer made available to dealers at that time. Another common indicator of a refinished machine from thie era, is that the trade mark badge will either be missing, or replaced with a silver coloured badge. 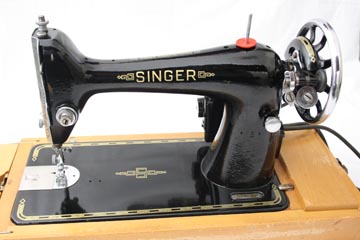 Refinished 66K in non-Singer Base

A pre-1935 Singer 66K fitted with ‘paperclip’ decals is usually a sure indicator of this process. Other signs to watch out for are an uneven edge to the japanning around the serial number recess, missing badges, or replacement silver coloured badges in place of the original gold coloured badges. Finally of course there is the presence of a non-Singer motor and foot controller and the use of a non-Singer case, usually of pretty poor quality with a pivoting wooden accessories cover, instead of the removable metal lid used by Singer.

The Singer 66 reigned supreme for over 30 years before the outbreak of WW2. By that time Singer had introduced the amazing Singer 201K, which was quite probably the finest sewing machine that Singer ever produced, as well as being their most expensive. Whilst the 201K appeared to have the same basic specification as the 66K, it also had the 2 missing features of reverse feed and dropping feed dogs and an unbeatable stitch quality.