The Singer 201 series of full size sewing machines were produced mainly in the USA and the UK, although smaller numbers were also made in some other factories as well. The Class 201 were first introduced in 1935 and continued in production up until 1961. It was the Singer Manufacturing Company's finest domestic sewing machine. Hundreds of thousands of them were produced and most of them are still sewing as finely and as strongly today as when they were first produced over 70 years ago.

201P models were the same as 201K23's but they were assembled in Penrith, Australia from parts made in the Kilbowie factory in the UK. The bases and cases for 201P models were made locally in Australia and are different to those for UK built machines. 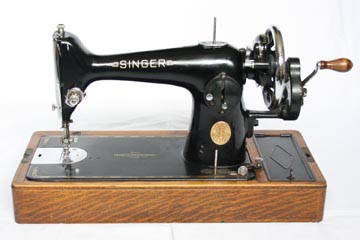 The full rotary hook and high-carbon super-hard meshing gears gave the machine a new smoothness. Even though the machine is straight stitch only, with reverse, Singer produced lots of attachments to achieve different finishes. These included Buttonholers, Zigzag attachments, Blind Stitchers and many more. Favoured by tailors and professional seamstresses because of the large 'harp' space, to accommodate bulky fabric, they could easily cost 6 months wages and so were frequently purchased on credit.

A 'big brother' to the marvellous 99K and same size cousin to the 66K, it shares the same drop-in class 66 bobbin, making it a very easy to use machine. However one difference was the needle insertion and threading. Contrary to most other models, the needle must be inserted into a 201 with the flat side facing to the left and threaded from right to left. The bobbin is placed in the machine with the thread winding off the bobbin in a clockwise direction (in the 66K & 99k the direction is anti-clockwise). The 201 has a numbered tension dial and stitch length indicator and is able to drop its feed dogs for darning and free-motion sewing. It is also very good at decorative top stitching with different thickness threads in the top of the machine and the bobbin. An extra spool pin was positioned to allow the bobbin to be re-filled without the need to re-thread the machine. The electric versions also came with a light attached.

Early models have the chrome scroll work face plate and back access cover. With a cast iron body and an overall weight of about 30lbs these machines weighed about the same as the 66K. They could not really be called portable and more often than not, were mounted into tables or cabinets. There were hand-crank, treadle and electric models.

The 201 models utilised a unique direct drive gear mechanism for the underbed transfer of power to the shuttle. 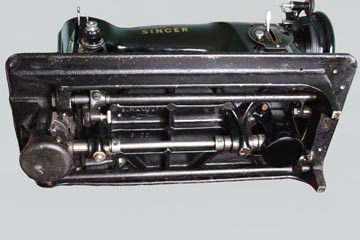 In the 1950’s a new design shape was introduced. Made of aluminium the machine was a lighter and more portable at 24lbs and came in either a wooden ‘Bentwood’ case or a two-tone vinyl covered case. The new ‘butch’ looks, with redesigned bodywork and plain black/chrome faceplate was produced in the classic black with gold decals and also in brown and beige, which was thought to be more modern looking at the time. The black ones are far rarer and harder to find and are the most prized versions now. These ‘new look’ models still had the top of the range mechanics and an unbeatable stitch quality, but by now the finest sewing machine in the world had become just too expensive to make, and so in 1961 production ceased. Many enthusiasts will say that today there is still no sewing machine made that will stitch better than a Singer 201. 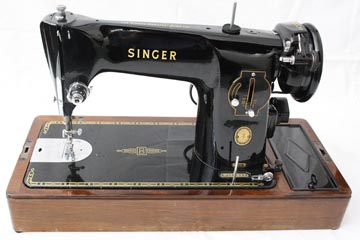 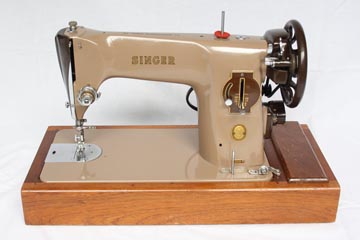