There is often much confusion about the specification of needles, so in this page we will attempt to clarify this.

When sewing machines were first being developed in the mid 19th century, each machine manufacturer had their own designs of needle which were often specific to certain models. These basic designs then came in different sizes to suit different size threads.

In the case of Singer, they soon established a system of identifying their needles by the machine model that the design was first used for, plus a design variation number. i.e. a 15x1 needle would be one introduced with the model 15 machines and the 24x1 would be one introduced with model 24’s etc. These were then known as Class 15, Class 24 etc. needles, with each Class coming in a variety of sizes. i.e. 9, 11, 14, 16, 18, 19, 21 etc. where the higher numbers had thicker shafts and larger eyes to suit thicker threads.

By the time the 15x1 needles with flatted shanks were introduced in the later part of the 19th century, the design was pretty much optimised and so they became the standard used on almost all subsequent domestic models up to this day. Other manufacturers also adopted the same 15x1 design as their standard, so it became almost a universal needle design.

Later in the 1960’s Singer revised their needle numbering system and the 15x1 became known as the 2020.

The Anatomy of a Needle. 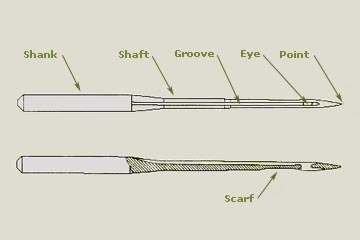 The Shank is the top of the needle that inserts into the machine.

The Shaft is the body of the needle below the shank.

The Groove is the slit that runs down one side of the needle to the eye.

The Scarf is an indentation above the eye on the opposite side of the needle to the groove. A long scarf helps eliminate skipped stitches by allowing the bobbin hook to loop the thread more easily.

The Eye is the hole through which the thread passes.

The Point is the needle tip below the eye

To buy the correct needle 3 pieces of information are required. These are the CLASS of needle, the TYPE of needle and the SIZE of needle.

Most domestic sewing machines, regardless of maker, utilise the Class 15 design of needle. These are identified as 15x1, 2020, 130/705H, HAx1 etc. in the various needle makers cataloging systems.

The only other needles occasionally encountered on domestic models, are the much shorter 24x1 needles used in models 20 and 24 machines and the 206x13 needles used on Singer models 206, 306, 319 & 320. The 206x13 is the same as the 15x1 except that the distance from the eye to the point is much smaller. It is VERY important that 15x1 needles are not used in machines designed for 206x13’s, or it may result in serious damage to the bobbin case.

Prior to the mid 1960’s there was only one kind of needle and these were called ‘sharps’.

When manmade fabrics became available, it was found that ‘sharp’ needles could not penetrate the fibres and bounced off producing skipped stitches. To overcome this a ‘ball point’ needle was introduced. The ball point needle has a more rounded tip that slips between the fibres instead of trying to pierce them.

Later in an attempt to avoid confusing people who didn’t know which needle to buy, a ‘universal’ was developed which was part way between a sharp and a ballpoint with a slightly rounded point.

As more modern fabrics arrived, more needle types were developed to sew them. Some needle companies decided it was easier to market their needles by stating the fabric to be sewn, so this information was included on the packaging.

There are also more specialist needles, like Twin (2028) and Triple needles, Metallic needles, Wing (hemstitch) needles, Spring needles and Schmetz have a double eye needle for sewing 2 threads at the same time.

For many years all needles were sized according to the Singer system of numbering from 9 to 21. In 1953 a new ‘metric’ designation was agreed where the size of the needle referred to the shaft diameter just above the scarf. Thus a metric size 75 needle would measure 0.75 mm diameter, for which the closest Singer size is Size 11.

Generally these two sizing systems operate in parallel and so both are shown on most packets.