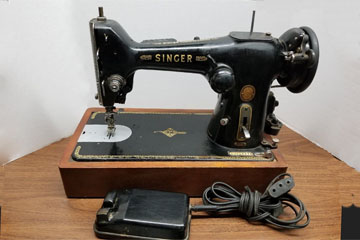 The Singer 206 was unusual in using needles with shorter points than the common 15x1 needles used on other domestic machine models. It is essential that ONLY the correct type 206x13 needles are used in the 206 models, or else serious damage can result. The 206's also used special type 55623 large capacity bobbins which were mounted vertically. The removeable bobbin case mounts into the hook from the front. It is therefore necessary to tilt the machine backwards to access the bobbin case underneath the bed. To make this easier, the base is provided with a latch to support the machine in the tilted back position.

Later Singer 206 models (206K43) featured a cast aluminium body and a revised bight control unit. There were many component changes made during the production of the various Class 206 models, so not all parts fit all sub-versions.

There are no records of the serial numbers of machines made in Bridgeport or Wittenberge.