Much has been written elsewhere about the model 48K, but unfortunately a lot of this seems to have been wrong, or at least misleading. Some people have chosen to compare the design of the 48K to the New Family (model 12/12K), whereas the more useful comparison should be to the Medium (model 13/13K). Although the 48K utilised the basic mechanism of the 13/13K, it was updated with several more modern features that were presumably borrowed from the established 27/27K, 28/28K models. 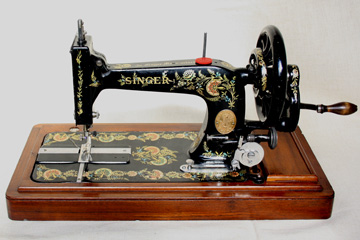 The major changes between the 48K and 13K were:

The 48K machines are unusual in that the bed of the machine measures 13" x 6-1/4" with overall wooden base dimensions of 19" x 9 1/2". Because this size is unique to only this model, the bases and cases from other models cannot be interchanged with the originals. The 48K is also unusual in that the serial number is stamped behind the main pillar, instead of the usual position in front of it on other models.

The 48K used a unique hybrid shuttle #92879 i.e. an enclosed version of the earlier 12K open boat shuttle, so that it is similar to that of the 28K, but made to suit a straight race instead of a curved one.

The 48 was produced only at the Kilbowie factory in Scotland between 1900 and 1913. The serial number records indicate that a total of 535,150 machines were allocated for production. All of the 48K machines had the Ottoman Carnation decals, although those intended for sale in India had the Indian Star variation in the centre of the bed.

There were 4 sub-versions of the 48K:

The standard machines were supplied in a plain wooden box with sliding lid, or a bentwood cover was available for an optional extra costs of 12/6 (12 shillings and 6 pence).

Singer's decision to make the 48K when they did is a mystery, because it clearly reverts back to technology and designs that were already 20 years out of date, and which had been superceded by models such as the 15 and 28 etc. Several people have speculated that the 48K may have been intended as a low cost model to compete with the many German high arm machines being made at the time. This is though just speculation. What is known, is that it was at the bottom of the model range and wasn't generally promoted in sales brochures.