The Vintage Singer sewing machine models VS1, VS2, VS3, 27, 28, 127 and 128 are all very much part of the same family of domestic sewing machines utilising a vibrating shuttle arrangement. Machines made in Scotland used model numbers 27K, 28K, 127K and 128K.

As an aid to distinguishing these vibrating shuttle models from other Singer machines, it should be noted that they all have a circular nickel or chrome plated stitch plate covering the feed dogs with 2 split nickel or chrome plated slide plates that run from front to back of the machine to cover the shuttle mechanism. The faceplates fitted to early models were polished plain plates, whilst later models are embossed with a ‘grapevine’ pattern. (please see Faceplates gallery) 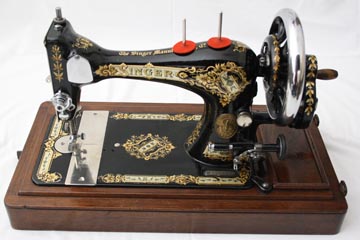 The Singer Company launched its first Vibrating Shuttle (VS-1 long bobbin) machine in 1885. These were available as hand cranked or treadle powered machines. However, due to their sheer weight, most were sold as treadle versions mounted in tables or cabinets. The early treadles used just one foot making a heel-toe rocking motion, but all later treadles, including those offered with Singer 27K machines, used both feet making a left-heel-right-toe (or vice versa) motion. One complete down motion produced 4 stitches.

Treadle tables/cabinets were quite large making them very much a piece of furniture, and not something to be packed away after use.

The Singer VS1 was not much more than a development machine which was quickly replaced by the upgraded VS2 which had a ‘fiddle’ shaped base. This in turn was gradually phased out in 1891 and re-branded as the 27K with a rectangular base. By 1912 the original design was ‘modernised’ to incorporate a new shuttle ejector mechanism and at the same time the bobbin winder was relocated to a higher mounting point, so that its rubber wheel would rub on the drive belt and not the drive rim. 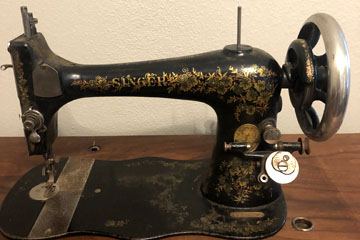 The Singer VS3 (later re-branded 28 and then 128) was introduced in 1886 as a 3/4 size version of the VS2. Paralleling its big brother, the VS3 underwent several minor modifications, during its lifetime before finally becoming the 128K. The changeover from fiddle base to a rectangular base took place around 1893/94. The smaller VS3, 28, 128’s were mainly manufactured as portable hand crank machines, but they were harder to use at high speed. Each time the crank handle turned it produced three rotations of the balance wheel making three stitches, but it did cause arm ache over time! 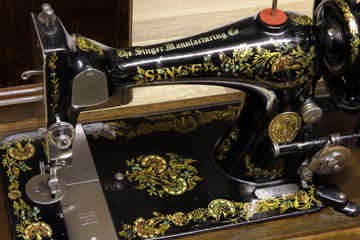 VS 3 (Photo courtesy of Jennifer Harp)

Hand crank machines came supplied in a small wooden case, making it more like a piece of luggage, rather than a piece of furniture. Early cases were known as mahogany ‘coffin lid cases’ whilst later ones were known as oak ‘bentwood’ cases. Early 28K’s have their bobbin winder mechanism positioned low down, using the machines drive wheel to turn the small rubbed bobbin wheel. Later 28K’s and 128’s have the bobbin winder located higher up to use the drive belt to wind the bobbins rather than the drive wheel. They also have a shuttle ejector mechanism and an automatic tension release system when the presser foot is raised. 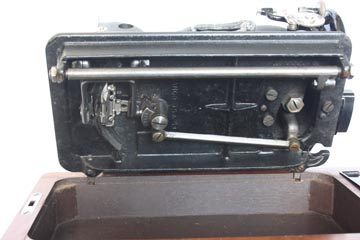 Early electric conversions consisted of mounting a motor in the treadle cabinet. The treadle belt was shortened to run only from the motor's pulley to the handwheel. The treadle pad was then fitted with a mechanism to control the motor's speed in a similar way to a modern car accelerator pedal.

Later, motor kits did away with the treadle, treadle belt, and cabinet. Singer 27K and 28K models had holes pre-drilled and tapped into the machine’s pillar to allow the attaching of small electric motors. These motors were small enough to allow the original wooden covers to still be used and a small foot controller to control the speed could be stored inside as well. Electric motors became so common that Singer’s model 127 and 128K’s ‘modernized’ versions included mounting lugs for a motor. Some 127K and 128K machines were even given motors right at the factory, and of those, a few models used a smaller lighter solid handwheel instead of the larger heavier spoked handwheel that has been used on machines with treadles. The spoked handwheel was better for treadles because its larger inertia kept it spinning longer, whereas the lighter solid handwheel was better for motors because its smaller inertia allowed it to start and stop more quickly.

Most Singer sewing machines of this era have very ornate decals. Although Singer did not name their decals, over the years collectors have given them various descriptive names. A few of the most common are :- Rose and Carnations, Victorian, Ottoman Carnation, Tiffany, Rococo, Pheasant, Sphinx and many more.

Later sewing machine designs abandoned the Vibrating Shuttle system in favour of the faster Rotary Hook system. However Singer also continued making the 127 and 128 machines until into the 1960’s.