It seems difficult to imagine now, but the Singer ‘New Family’ sewing machine first appeared in 1856 at the end of the America Civil War and and at the time the 'Wild West' was still being won. Just a couple of years later it went on sale in the U.K.

The New Family Class 12 models were made in very large numbers at both the Elizabethport, New Jersey and the Kilbowie, Scotland factories. 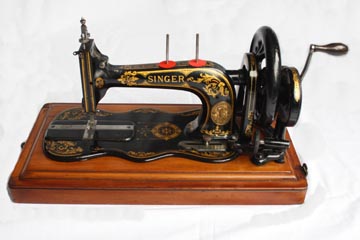 The New Family was later renamed the Singer Model 12 (12K in the UK) and remained in production for almost 40 years, until just past the turn of the 20th century.

The characteristic shape of the bed on the early models resulted in them being referred to as Singer fiddle base machines. The New Family was the first high volume mass produced sewing machine. Despite its high cost, its attractive and reliable design meant that it sold in huge volumes and quickly established Singer as the market leading sewing machine manufacturer for next century. As soon as the original patents expired, the New Family design was widely copied by other manufacturers.

The New Family Model 12 machines had a transverse boat shaped shuttle and used round shank straight needles which were designated as Class 12x1. 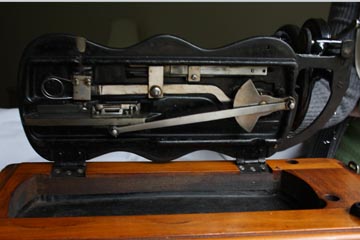 Over their long production run there were several minor modifications made to the machine. The most significant of which was the transfer of the tension adjuster screw from the front of the faceplate to the top. Earlier examples utilised a pivotting lever for disengaging the drive to the machine, whilst later ones had a stop motion button which had to be pulled and twisted to disengage the drive dog from the main shaft. 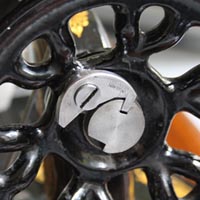 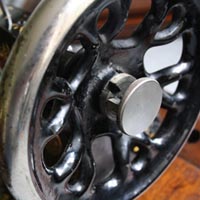 Early machines have two serial numbers; the largest of these is the one used for dating the machine. During its evolution the bed shape was changed from the fiddle base design to the more modern rectangular shape.

Although most ‘New Family’ machines were decorated with gold ‘Acanthus’ pattern decals, some were also produced with ‘Gilt Mother of Pearl’, ‘Large Roses’, and ‘Ottoman Carnations’ patterns.

The New Family, 12, 12K shuttles are complex to thread. Please see the Class 12 Shuttle Threading page to see a dedicated guide on shuttle threading and setting of the bottom thread tension.