From before 1880 Singer had a local Agency Office at 281 Notre Dame, Montreal. By 189O this had been replaced by a main office and showroom at 1675 Notre Dame, near Place D'Armes, in the commercial centre of the city. 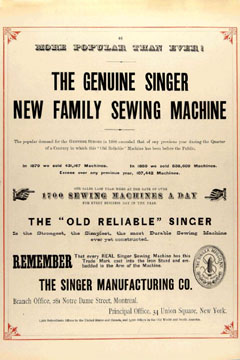 In 1882 The Singer Manufacturing Company established a small Canadian factory to the south-west of the city centre at 2710 Notre Dame (St. Joseph Street) near the corner with D’Allemand Avenue. In 1890 the Superintendant was Jacob Dieihl and the Manager was W.A. Clarkson. 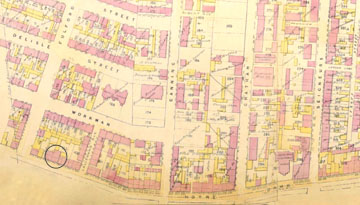 The factory was in a terrace of industrial buildings with no outside yard or storage space. There was no rail link to the site, but it was close to the Lachine Canal with a wharf on the other side of Notre Dame, so probably that was used for transport of incoming materials and for shipping out finished machines.

The size and location of the factory would suggest that it wasn't suitable for manufacturing or casting of metal, so it is likely that it was just used to assemble machines from parts shipped in from Elizabethport, New Jersey.

Production continued at the Montreal factory until 1906, when a replacement factory was opened at a much larger site in Saint-Jean-sur-Richelieu, Quebec.

From the allocation of serial numbers records, it appears that during the last few years it was producing about 30,000 machines a year of models 15, 16, and 27.