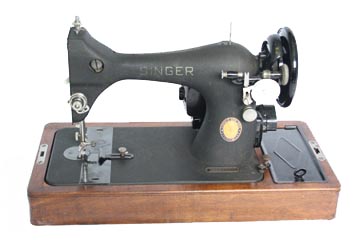 Singer 128 with both Blackside & Crinkle Finishes

During the period 1941 to 1953 Singer occasionally produced what are known as ‘Blackside’ models. Unlike the standard machines, many of the normally bright plated parts utilised a chemically blacked finish instead. This is thought to have been in response to shortages of nickel and chromium.

It is a characteristic of these machines that there seems to have been no hard and fast rule as to which ‘Blackside’ parts were fitted. Generally needle plates, bobbin covers and faceplates etc. would all be Blackside, but various knobs, levers, screws etc could be either bright or black. At the same time Singer also produced a range of accessories, tools etc and even bobbins that were blackside. Generally blackside components had the same Simanco part numbers as their bright plated counterparts.

Also in roughly the same period Singer produced some machines with a ‘black crinkle’, ‘black wrinkle’, ‘Godzilla’ finish. Whatever you call them, they are relatively RARE. Research indicates that Singer only produced limited runs of models 66, 99, 128 and 221 with this finish, and these all date from the 1941 to 1953 era. A few exceptionally rare ‘Centennial’ model 99 and 128’s were also produced in 1950 with a crinkle finish and specialist collectors rate these very highly for their rarity value. 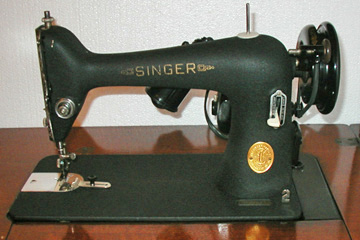 The decoration on crinkle finished machines consists of just the Singer logos and a small decorative embellishment in the middle of the bed, but no decals around the edge of the bed. Because of the nature of the crinkle paint the decals are faint and not bright and shiny like normal Singer machines. All of the black crinkle models appear to have been manufactured with ‘normal’, shiny drive wheels, either spoked or solid, depending on the model, and whether it was a hand crank or an electric type.

It has often been speculated that the crinkle finish was somehow related to war shortages, or perhaps a military contract. However, there is no evidence to support this and it was most likely just a cosmetic variation that Singer produced for marketing reasons. In the case of the crinkle 221’s, they uniquely had a series of small grooves machined around the edge of the bedplate, and some also had a special black faceplate with matching grooves.

Crinkle finish machines can sometimes also be associated with the use of ‘Blackside’ fittings, but by no means always.