At first glance the Singer Featherweight 221 and 222K sewing machines can look like a child’s toy, as they are so small and compact in their LP sized carrying boxes. However their diminutive size did not detract from their functionality and they became highly popular with occasional sewers because they were so easy to pack neatly away for storage after use.

The Featherweight machines were substantially lighter than previous Singer models. The main casting was aluminium and the whole machine was much lighter at under 12 lbs. By comparison, a modern electronic weighs around 16 lbs, a 99K hand crank model 24 lbs and a motorised 66K a whopping 32 lbs! They were characterized by a fixed fold-up extension of the bed to add extra sewing surface on the left hand side of the needle. This fold-up design allowed the machine with its attachments to fit into its own carrying box and still be light enough to be considered portable. Providing only straight stitching they sewed very well for day to day use and separate zig-zag attachments could be bought and fitted in place of the presser foot if this feature was required. Reverse was easy to use by just sliding the stitch length lever upwards. The extremely quiet motor made them a pleasure to use.

From its introduction in 1933 the 221/221K went through 4 major variations until production was finally ceased in the late 1960's. An enhanced 222K freearm model was introduced in 1953.

All of the black Featherweights were decorated with attractive gold decals and the Singer name on the lamp housing, but nowhere did they say the name ‘Featherweight’ on them. Up until 1953 they also didn't have the model number shown, but after this Singer added a riveted plate with the model number just below the badge.

The last Featherweights made were the 221K7's. These were all produced at the Kilbowie plant in Scotland. The K7's were white and quite plain with no decoration except for the Singer name on the lamp cover in gold decals.

For approximately 8 years a 222K variant model was made, the bed of which was detachable to allow "free-arm" sewing of cuffs etc. The 222K also had the added advantage of being able to lower its feed-dogs to allow for embroidery or darning work. Many consider these to be the most attractive collectors sewing machine Singer ever produced and examples in good condition sell for very high prices.

During the very early 1960's a few 221J machines were produced in both Canada and Scotland. Featherweight 221J's were finished in a tan colour and like the 221K7's they were plain without decoration.

During its production period there was a US version and 4 UK versions of the 221 Featherweight and an enhanced 222K freearm machine with removable bed. The easiest way to quickly identify a particular variant is by looking at the motor nameplate, as they each used motors of different types.

The 221K4 is the only variant that had the switch for the light built into the lamp body instead of on the machine base. It also was the only one to use an RF suppression capacitor mounted underneath the baseplate. If this is present then a small green wire with a brass plug should be visible fitted into the lower clamping bolt of the motor case.

The K7 variants had several major changes from earler models. They were painted white without any decorative decals, the hinged extension table was shorter, they used a clamshell style foot controller that was permanently wired into the machine, and the orginal cam and rocker assembly for transferring motion to the bobbin and feed dogs was replaced with a toothed belt system.

The early models of the 221 & 221K had an ‘Egyptian Scrollwork’ pattern on the faceplate whilst those produced later had a simpler striated pattern of vertical stripes. 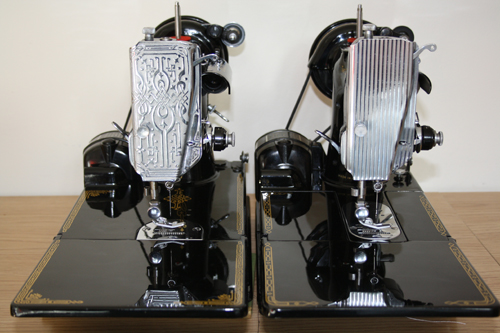 The carry cases of the 221K and 222K were of different sizes, the latter being shorter and wider. Early 221’s had a tray in the top which rested across the top of the machine and housed the attachments and the power cable and foot controller. Trying to squash the stiff cabling into this narrow area proved difficult so later machines adopted the system also used in the 222’s case. This had the foot controller clipped into a metal frame in the lid of the box and a much smaller box, instead of the tray, attached to the left hand side of the case. This held the attachments and bobbins etc. The black models had a black fabric covered case and the much more modern white version had a two tone light blue base and dark turquoise blue lid.

All Featherweight sewing machines were supplied with a comprehensive range of attachments for specialist sewing techniques.