The Singer models 327K and 328K aluminium body sewing machines were made in the Kilbowie plant in Scotland between 1960 and mid 1965. Similar models were made in Canada as the 327J and 328J and in Penrith, Australia as 328P. The British and Australian machines were either tan or grey in colour, whilst the Canadian models came in light blue. 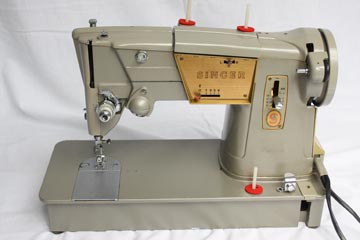 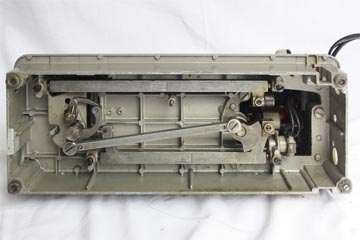 The 327 models were zig zag machines with a single pattern cam permanently fixed inside the machine to provide the zigzag pattern. The 328 was sometimes referred to as ‘Style-O-Matic’. The 328 had the option of producing a wide range of fancy stitch patterns using interchangeable Type ‘A’ disc cams "fashion discs", accessed by a lift up portion of the top cover. 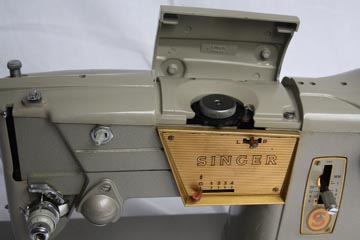 The same models were also made in the USA where they were given the model name ‘Genie’.

Early models had no switch for the light and had two decorative plates on the front at the needle position and stitch width controls. The Singer logo was on an adjacent painted section of the body. Later models had a single plate for both controls incorporating the logo, and the cam cover was a simplified design. All models had the power and foot control cables permanently mounted to the machine.

Kilbowie built models had a wooden lift off cover that locked into the bed of the machine. Some Canadian built machines had a plastic cover.

Mechanically, the 327 and 328 used an internal, belt driven motor. The hook drive was an all steel system with a vertical shaft and gears plus a crank to transfer the drive to the horizontal oscillating hook.

The 328 was double needle capable, with three tension discs and could be converted to treadle operation by making use of a removable plastic plug on the bed of the machine.

The 328K offered similar features to Singer’s more expensive machines at the time such as the 401G but at reduced specification, such as reduced zig zag width. The cost of a 328 was typically 40% less than a 401, achieved through its simplified mechanical design. The 327 and 328 use low shank feet, which are now more widely available than the slant shank of other Singer machines of the period.

The 327K and 328K have a reputation in the UK of being sturdy, reliable, versatile and easy to use machines. In the US, critics cite a weak, noisy motor. 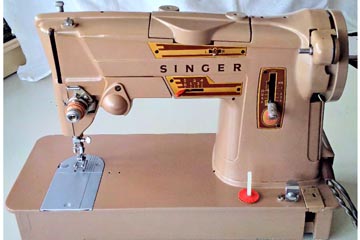