Although most models of Singer sewing machines share some similarities, the model 9W is obviously completely different. This is because it started off life as a Wheeler & Wilson model D9. After Singer bought the Wheeler & Wilson company in 1905 they kept production of the D9 going at the Bridgeport factory, but badged the machines as Singer model 9W. The most instantly noticable feature of the model 9W is that it has a square section pillar rather than the normal round section pillar of other Singer models of the time. It was not until the 1960's that Singer re-introduced square section pillars in the 239. 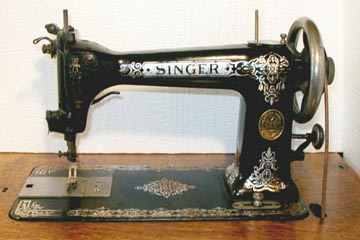 Initially the 9W’s were mechanically identical to the D9’s, presumably whilst they used up the stock of existing components, and to keep the factory busy whilst Singer assessed its future. These early machines had a W prefix to the their serial numbers.

Later, once the new management was established, several changes were made to the 9W to bring it more in line with other Singer models. In particular the size of the bed casting was increased and the hinges relocated, so that it was interchangeable with other Singers machines. This allowed the 9W machines to be fitted into the standard range of Singer cases, treadle tables and cabinets. These later model 9W7's had plain serial numbers in the same sequence, but without the W prefix. The spool holder was also changed when the original fold over W&H frame on the centre of the arm was replaced by the Singer straight spool pin at the balance wheel end.

Production of the 9W7 machines ceased in 1913 after which the Bridgeport factory produced only industrial models.